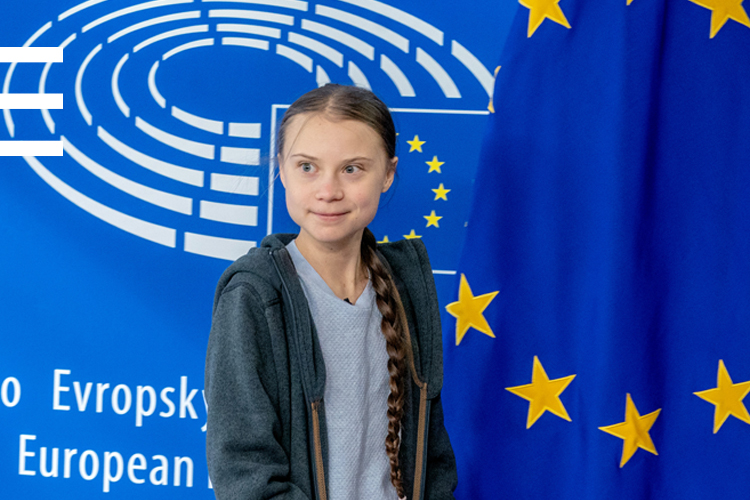 For a decade until now, climate change has been a big concern for citizens of all age groups in the EU.
This has been proved by the results of the 2021 Eurobarometer which showed that 93% of Europeans believe that climate change is a serious problem.

However, while very little has been done, the younger generations took actions and brought climate crisis to the top of the policy agenda worldwide.

In 2018, 15-year-old Greta Thunberg started school strike every Friday to demand concrete climate action inspiring young protesters around the globe under the Fridays for Future movement.

The influence of the movement, which mobilised millions of people, served as a wake-up call for policymakers in Brussels, other European capitals and beyond.

Arguably the movement inspired by Greta Thunberg served as a push for the establishment of the European Green Deal under the Von der Leyen Commission and the shift of EU policy towards sustainability in all its dimensions.

anxiety and distress over the climate crisis

Climate change, and the lack of sufficient action to fight it, is a source of worries for younger generations, as it is a direct threat to our future.

A global study found out that 45% of the 10,000 young people surveyed across 10 countries declared that anxiety and distress over the climate crisis was affecting their daily life.
And it is the feeling of being ignored and betrayed by politicians and adults spurred the climate-related demonstrations.

Friday for Future’s protests also made clear that the youth want to engage and actively contribute to shape policies that will determine our future.
And it is this commitment towards our future that must continue making politicians accountable for their inaction or lack of ambition, at a time where science can’t be clearer.

Against this background, several initiatives have been launched by the EU Institutions to support the involvement of young European in EU environmental policies.

In the context of the European Green Deal, the European Commission launched the European Climate Pact with the objective of engaging and empowering Europeans of all age groups and origins to work together, establishing a network and developing ideas and solutions pursuing real change.
The structure of the pact allows everyone to participate in the movement in many ways!
One of them is to become a ‘European Climate Pact Ambassador’.

Ambassadors inform, inspire and support climate action in their communities, becoming a bridge between civil society, relevant stakeholders, and the European Commission.
Among our duties, we advocate at the national, regional, and even local level to authorities, organisations, and business for them to engage and commit to ambitious climate action and pledges. We also raise awareness on topics related to climate change by sharing scientifically reliable knowledge in different events.
Everyone, including young people and organisations, can become an Ambassador and contribute to the Ecological transition.

Another example of how young people can be involved in environmental policy is the European Youth Event (EYE).
Taking place every two years, it brings together thousands of young people from across Europe and beyond to discuss ideas on the future of Europe.

This year the EYE2021 will take place from 4 to 9 October in Strasbourg.

The event is the culmination of the European Parliament’s youth consultation process for the Conference on the Future of Europe. Once proposals are voted and discussed, these will formally be presented in a report and presented to the members of the Conference.

I will proudly participate representing IEEP and I will take part of this exciting opportunity by participating in a panel discussion with MEP and Vice-President Roberta Metsola, to discuss the Next Generation EU plans and whether the priorities of the youth are being taken into account in the plan, including those related to the Ecological Transition.

iThere are no comments

Begin typing your search above and press return to search. Press Esc to cancel.